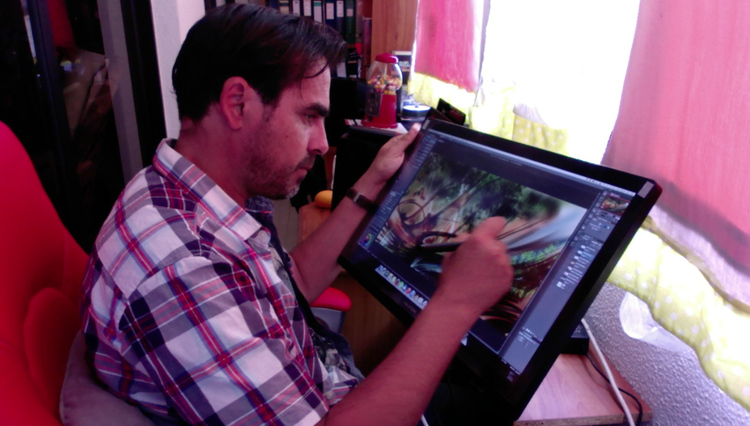 Luis Peres is illustrating professionally for more than 20 years. Since 1992 he created illustrations, greeting cards, designed posters, worked on comic books for school children as part of Eco-awareness campaigns, designed websites and even a lot of software design creating visual content and layouts for hospitality software among many other areas. That and also done a lot of generic graphic design.

He was part of the team that created the first Portuguese PC video game Gambys that came out back in 1995. He designed the game characters; created hundreds of sprite animation, pixel by pixel on the old Deluxe Paint software long before Photoshop came along. He also modeled and made a few 3D rendered short films to include in the game; at a time where 3DStudio was just beginning and was still in its 2.0 DOS version; if you can imagine how that was like back then with a 4.6PC at 33Mhz speed…fun times.

He is skilled in watercolors, acrylics, color pencils, etc but at the moment he does most of work in digital, using ArtRage , Manga Studio, Mischief or Photoshop painting on a Huion GT-220 Pen Display.

Do check his awesome website I create Worlds – www.icreateworlds.net (link will be opened in new window).

Some of his illustrations

All material in this page is owned and copyrigted by Luis Peres, see site I Create Worlds (link will be opened in new window).

We are out of office until August 17 2022. New orders will be processed on August 17. Dismiss